Vivid Thoughts: Economic Zones as a tool for industrialisation

This piece is one of a series prepared by Vivid Economics, in partnership with WEPZA (World Economic Processing Zones Association), the world’s first association of Special Economic Zones.

Economic Zones as a tool for industrialisation

Economic Zones (EZs) include a range of geographically delineated zones which deploy specific policies and incentives aimed at promoting activities leading to economic growth. These zones go by many names, reflecting their range of goals and include freeports, free zones, industrial parks, and innovation centres to name a few. Governments design and implement EZs to achieve various economic development goals such as a) increased exports, b) increased employment and skills development, c) attracting foreign investment and d) developing capabilities in selected industries.

As Economic Zones have evolved over time the benefits they provide host countries and the incentives they need to attract investors has shifted. The first EZ was created in Shannon, Ireland, 1959. Since that time, there has been significant expansion in the function of EZs and the benefits which they provide. Broadly, EZs have evolved across three archetypes, as illustrated in Figure 1: 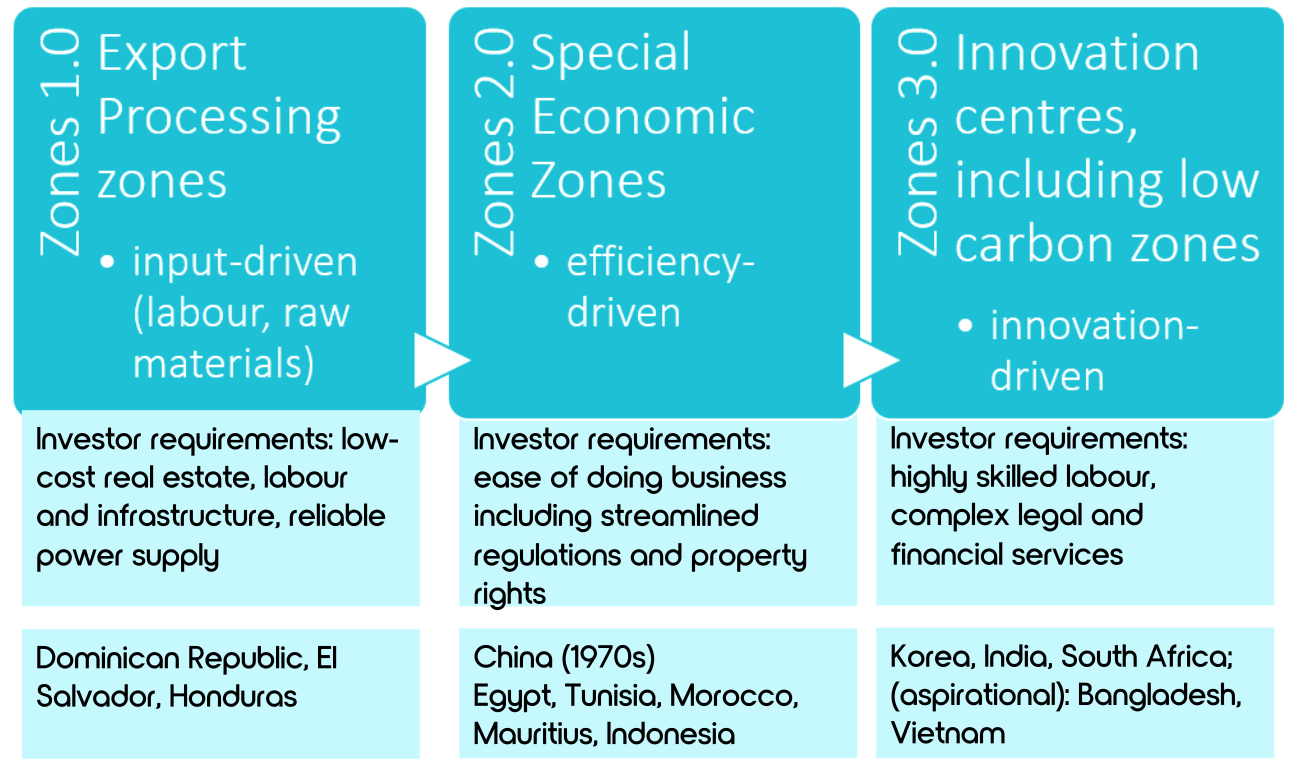 The ability of EZs to achieve a wide array of policy objectives is strengthened by their export-orientation, integration in global supply chains, and business and investment density (IFC, 2017). The attractiveness of promoting policy goals through EZs stems from their:

However, EZs remain most effective when they target a small number of objectives and are aligned with wider national government goals. Zones that are most successful have identified a core economic or social policy objective they want to pursue. In contrast, those that are unsuccessful have lacked focus (DNA Economics, n.d.). The South African Industrial Development Zones (IDZs) programme is one such example. These zones were initially developed with no over-arching policy objective, resulting in a variety of incentives focused on quite different investor outcomes. This lack of focus resulted in zones that were unattractive to all groups of investors.

With the guidance of Vivid Economics, Indonesia is currently developing its SEZs, which will be aligned with a ‘Zones 2.0’ approach, for the combined objectives of industrialisation and green growth. Indonesia’ medium-term development plan (RPJMN) targets the development of a comparative advantage in Indonesia’s primary sectors (BAPPENAS, 2015). The development of Zones 2.0 is an established tool to attract investment towards higher value manufacturing and therefore can help Indonesia to transition away from primary resource extraction towards manufacturing. Additional benefits from the development of SEZs include the transfer of skills and technology, the diversification of exports and the economy-wide application of SEZ piloted policies.